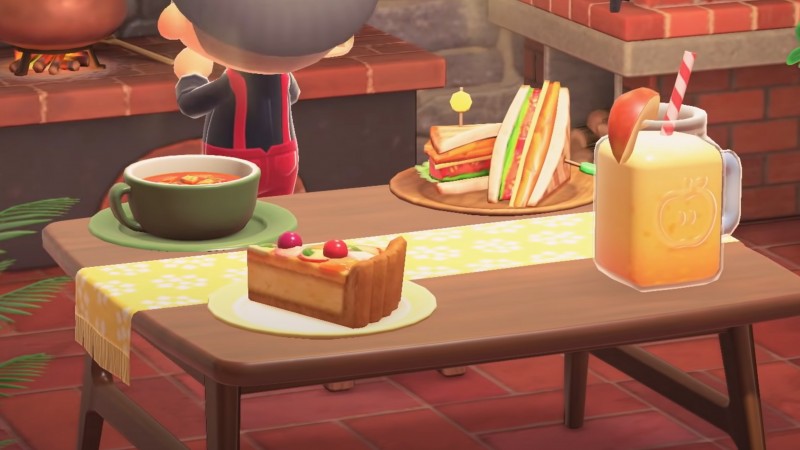 Is there anything better than sitting down to a big feast, surrounded by friends and family on Thanksgiving? Yes. Absolutely crushing a culinary rival before sitting down to that feast. Which is why, this year, I sparked up a totally friendly cooking competition with Game Informer’s resident Instagram chef, Brian Shea. Of course, I have no cooking skills. Even the least flammable foods turn to fiery ash as soon as I enter the kitchen. But that doesn’t matter because I have a virtual ace up my sleeve.

I’ve been putting Animal Crossing: New Horizons’ newly introduced stove through its paces, growing crops, stealing techniques from villagers, and gathering all possible ingredients to whip up some mouth-watering dishes. So, instead of a fair fight that I’d lose, I challenged my fellow editor to a battle between his real-life creations and my, obviously superior, New Horizons masterpieces (the secrets of which I’m ready to share). I’ll leave the reader to decide who gets the gold as we go through several courses, but I’ll bet a million Bells I know who wins.

Okay, first round. And right out of the gates, I’m already smoking the competition with some mixed-fruits sandwiches. Those street tacos are no slouch, I’ll give you that, but the ingredients and teamwork put into my refreshing appetizer are clearly showing through. Anyone looking to replicate my success should start getting friendly with a culinarily inclined villager for the recipe. It also wouldn’t hurt to shake every tree you can find for an orange, pear, and peach. Oh, and put on your farming gear because you’ll need wheat for that delicious, fluffy bread.

In this salad showdown, you can go ahead and toss my competitor’s lettuce letdown right in the trash because my turnip salad is unbeatable. Anyone familiar with the Stalk Market will know the best and most valuable root vegetables come straight from Daisy Mae on a Sunday morning. What you might not know is she overnights her favorite customers the instructions for her secret turnip-themed dishes after a sale. So, if you want full wallets and full bellies, invest in this cash crop. You know Brian wishes he did.

I found this delectable bread gratin recipe in a bottle just sitting out on the beach, so it seems like fate wanted me to win this side dish category. Hopefully, the amber waves of grain in your wheat field are bountiful because, for this dish, you’re going to need enough to make regular flour and its whole-wheat variant. But pound-for-pound, bread gratin is going to give you a more satisfyingly cheesy mouthful than any macaroni. So, who can complain about waiting days for Leif to finally sell wheat starters or the slow work of picking crops one-by-one when the final reward is crushing my fellow editor?

Sometimes a perfect plate doesn’t need a ton of extra ingredients and effort. Case in point: carpaccio di marlin blue. Sure, some chefs may prefer to cook their fish, place it over rice and throw in some greenery for good measure. But, for that elevated simplicity in your Animal Crossing cuisine, you just need to catch one blue marlin at the nearest pier, chop it up, and serve it still tasting of the sea. And if you don’t hook the impressive cerulean creature right away, you can always give the unwanted fish to other cooks so they can make inferior meals.

With my Roost sable cookies up for the dessert round, you can stick a fork in this competition – and my rival’s waffle – because it’s done. It was a hard path to the winner’s circle on this one, as I had to order coffee from Brewster for six days, and drink every cup under the pressure of his judgmental stare, to convince the barista to give up the recipe. I’m either feeling the thrill of victory right now or the copious amounts of caffeine, paired with this winning sugar-and-flour-filled treat, are sending my energy levels through the roof.

If you’re looking to get in on the cooking action with an impressive dish, head on over to my rival’s recipe of how to make the Leblanc Curry from Persona 5.

Update: Nick Offerman Cast As Bill In HBO’s The Last Of Us Series