WASHINGTON/BEIJING: Virtually calling China a terrorism supporter, the US indicated that members of the UN Security Council may need to consider “other actions” if Beijing continued to prevent the sanctions committee from designating Pakistan-based Jaish-e-Mohammed chief Masood Azhar a global terrorist.

A day after Beijing used its veto to stall the sanctions committee’s near-unanimous decision to designate Azhar a terrorist, a Security Council diplomat said China should not prevent the UN panel from doing the job the Council has entrusted it to do, and Beijing’s move to hold the listing was “inconsistent with its own stated goals of combating terrorism and furthering regional stability in South Asia.”

“If China is serious about these goals, it should not protect terrorists from Pakistan or any other country from being held accountable to the Council,” said the diplomat, who did not want to be identified by name or country. The diplomat warned, “If China continues to block this designation, responsible member states may be forced to pursue other actions at the Security Council. It shouldn’t have to come to that.”

Defending its actions, China said the UNSC committee needed more time to find a “lasting solution” on the matter. Chinese spokesperson Lu Kang said, “Only a solution that is acceptable to all sides can fundamentally provide a chance for a lasting solution to the issue. China is ready to communicate and coordinate with all sides including India to properly handle this issue.” 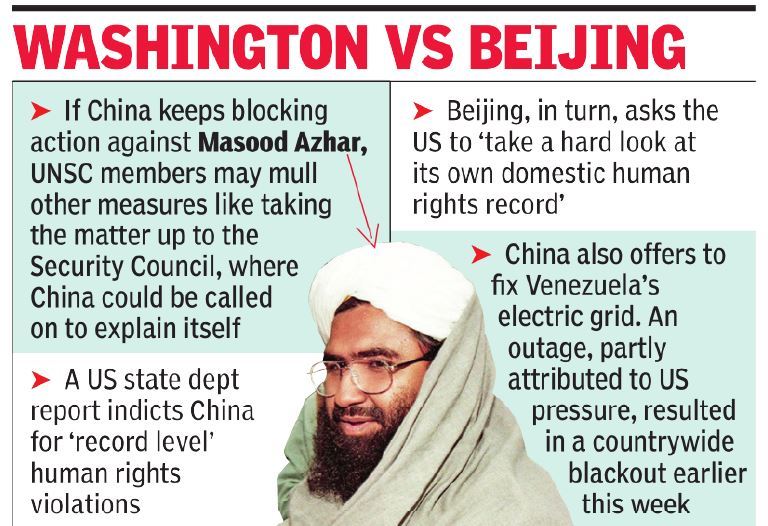 Even as the US made plain its unhappiness over the Azhar block, there was more stormy weather on the US-China front over a state department report indicting China for “record level” human rights violations, a charge that Beijing rejected as “ideological prejudice”. China counter-attacked and said, “We also advise that the United States take a hard look at its own domestic human rights record, and first take care of its own affairs.”

China also offered to fix Venezuela’s electric grid, whose outage, partly attributed to US pressure, resulted in a countrywide blackout earlier this week. Beijing’s move in America’s backyard attracted the ire of NSA John Bolton. “If China wants to help Venezuela, it would freeze funds stolen by Maduro, support the peaceful constitutional transition led by President Guaido and support his plan for reconstruction,” he tweeted.

If China wants to help Venezuela, it would freeze funds stolen by Maduro, support the peaceful constitutional trans… https://t.co/17XMbE3Hmf

In Washington, the diplomat did not elaborate on what ‘other actions’ were being contemplated by member states but considering the move to designate Azhar a global terrorist has near-unanimous support, it is conceivable that the matter may be bumped up to the Security Council itself, where an isolated China could be called on to explain itself before the world.

Four of five permanent UNSC members — US, UK, France, and Russia — back the move to designate Azhar a global terrorist, with China the lone holdout.

“One big state holds up, again… one small signal at UN against terror. Grateful to the many states – big and small – who in unprecedented numbers joined as co-sponsors of the effort,” India’s envoy to the UN Syed Akbaruddin tweeted after China foiled the proposed listing on Tuesday.

Big,Small & Many… 1 big state holds up, again … 1 small signal @UN against terror Grateful to the many states… https://t.co/g0UoaNyJIF

China maintained it needed more time to conduct an ‘in-depth assessment’ of the application to designate Azhar a global terrorist. But the Security Council diplomat who spoke to the media on background noted that it was the fourth time Beijing had placed a hold on the listing, suggesting that the Chinese excuse was bogus. Besides, Azhar had brazenly claimed credit for the Pulwama attack, backing down only after the Pakistani establishment had shut him up.

“Pakistan has quite often depended on China to protect it from the listing of Pakistan-based terrorist groups and individuals in the UN 1267 sanctions committee. The case for designating Masood Azhar – the leader of a group the UN already calls an Al Qaida-affiliated terrorist organisation – is undeniable,” the Security Council diplomat said.

China’s disturbing cover to Pakistani terrorists and terror organisations is credited as much to its economic investments in Pakistan as to its need to needle and constrain India. Beijing’s intransigence has angered both New Delhi and Washington, which see a fairly open and shut case for Azhar’s listing considering his long history of espousing terrorism.

In fact, even Islamabad had resigned itself to China lifting its hold on the listing this time, and many civil society analysts in Pakistan hoped they could get the Azhar bogey off the country’s back.

The flap over China’s support for Pakistan’s terrorism proxies came even as India and the US resumed and advanced their strategic dialogue during the visit of India’s foreign secretary Vijay Gokhale.

“Met with Indian FS Gokhale to advance progress on the US-India strategic partnership and our shared vision for the Indo-Pacific, as well as reiterate that the US stands shoulder-to-shoulder with India in the fight against terrorism,” Bolton tweeted on Wednesday.

Met with Indian FS Gokhale to advance progress on the U.S.-India strategic partnership & our shared vision for the… https://t.co/e3vIy9p3vF